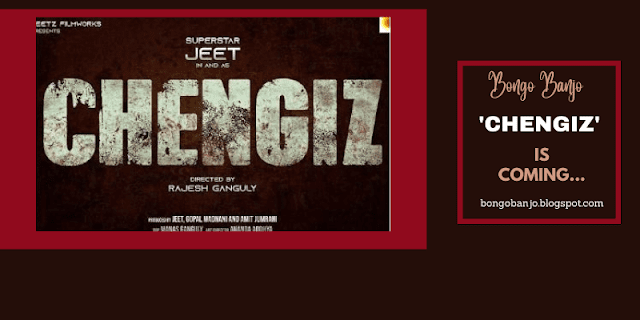 This time Sushmita Chatterjee, popular as 'Prem Tame', with Jeet, 'Chengiz' is coming.

Yes, Tolly Superstar Jeet announced his new movie 'Chengiz' on Wednesday.And in this film, Sushmita Chatterjee will be seen having a romance with Jeet.

Jeet's new film 'Ravan' is going to be released next Eid. And before the release of that picture became the masterpiece of the new movie of Jeet. Rajesh Gangopadhyay is in charge of directing 'Chengiz'.

Sushmita Chatterjee, the daughter of the Asansol, is already a popular name in Tollywood. She has worked with Mimi in Arindam Sheel's 'Khela Jakhan', he has done 'Paka Dekha' with Soham and this time he is the heroine of superstar Jeet.

Sushmita Chatterjee posted a picture on social media with Jeet's clapstick in her hand. Sushmita was found in a pink salwar kameez in the photo. On the other hand, a blue T-shirt and thick blue denim Jeet in the casual look.

Jeet's production company is also in charge of producing this film. However, it is known that Kolkata of the nineties will come up in the film. 'Chengiz' will be a complete commercial film.

The table is not broken, the Jeet will come in front of the audience at the familiar table. On the day of opening, Jeet brought the logo and first look poster of the film.

The film is set in Kolkata, so the shooting of 'Chengiz' will continue across the city in the next few days. Fans are excited to see this new pair on the silver screen.

Read More: Request for 40 minutes but Rituparna was not allowed to board the plane!