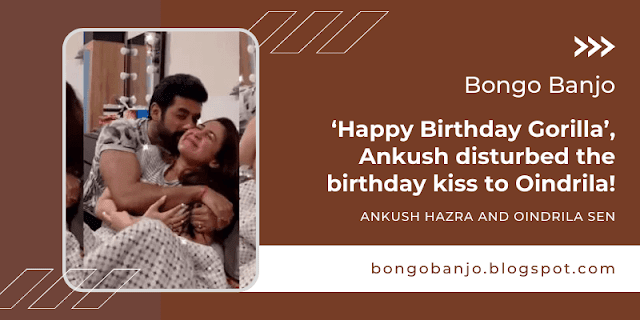 Ankush Hazra and Oindrila Sen are the first to be named in Tollywood's 'Super Cute' couple. Like Tom and Jerry. This is the feeling that you are fighting!

They lose sight of each other. Have been around for 11 years. News that he will get married very soon. However, in this way anyone can wish you a happy birthday, it seems you will not even dream.

Two people sitting side by side on the bed. Ankush Hazra grabbed Oindrila Sen from behind and said, 'Happy Birthday to you! Then said ‘Gorilla’ instead of ‘Oindrila’. At the same time, of course, he took the exact name. Then the turn of kissing began. He threw her on the bed, kissed her and left her in a very bad condition.

Sharing this video, Ankush wrote, "What happens after 11 years?" Pooja Bandyopadhyay, Deblina Kumar, Adrija Roy have commented on this video.

She also jokingly said that they quarrel so much that they do not want to take the risk of getting married.

Read More:  'Chengiz' is coming for the first time Sushmita Chatterjee with Jeet!