Hi, Friends, if you regularly watch Uron Tubri Bengali TV Show, then this article is only for you. Today We review a fresh TV show named Uron Tubri exclusive on Zee Bangla.

Laboni Sarkar demands, "Constructive criticism without discussing the similarities between the two channels or the two Tv shows. Which will enrich the Tollywood."

Premature awakening of the festival of light on March 26! With Zee Bangla's new serial 'Uran Tubri'. Her small celebration at Bharatalakshmi Studio was last Friday.

In a middle-class neighbourhood, everyone is playing with colours. Savitri, a middle-aged woman, is frying snaks while sweating. His three daughters are helping hand in hand.

Mother of three daughters in a row. So the husband left. Savitri has made children by trading chops with her hands alone. This is the story of producer Firdausal Hasan's new series 'Uron Tubri'. 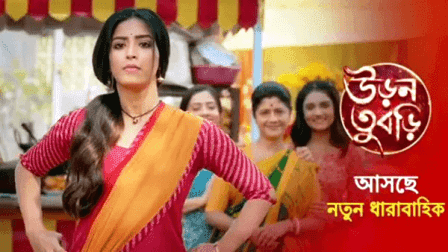 Crowds recently watched the shoot at the first-rate studio in South Kolkata. The ‘mother’ of the series, Laboni Sarkar is frying one chop after another with her hands dressed in a sari in Attapur! 'Savitri' faces reporters after the shoot.

Since the announcement of the series, this series is coming to be a rival of Star Jalsa's 'Gantchhara'. Responding to that speculation, Laboni Sarkar said, "All middle-class Savitri's are the same. We, the actresses, will make a difference between them. Our acting adds new dimensions to the character.

Besides, new actors and actresses are also working hard. As a result, make constructive criticism without discussing the similarities between two channels or two series. Which will speed up the series. Will enrich Telepara or Tollywood. "

Laboni Sarkar's three daughters are Sohini Bandyopadhyay, Sukanya Basu and Soumi Chatterjee. Sohini is Tubri. That in his family is not a girl, but like a boy. Injustice is not tolerated at all.

According to Laboni Sarkar, there should be such a girl in every house. Apart from this, Rita Dutt Chakraborty, Swastik Ghosh, Bikash Bhattacharya will be seen in different roles. Abhijit Guha, Ri Sengupta will face the camera in a special role.

Read More: Seeing the love of star couples, I am learning to fall in love: Jeet!