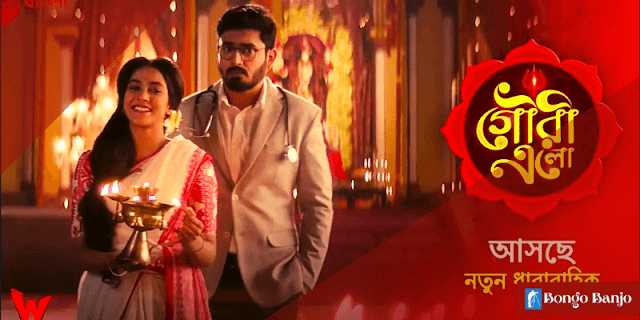 What is this? Gouri wears incense while wearing a garland in Leonardo da Vinci's Mona Lisa painting! These clippings of Zee Bangla's 'Gouri Elo' are now going viral on the Internet. Gouri is being ridiculed.

In just a few days, Zee Bangla's 'Gouri Elo' has topped the TRP list. However, it should not be forgotten that this serial has not been less trolling on the Internet since the beginning.

A large part of the audience has also filled the new pair of Mohana-Vishwarup with love.

A few days ago, Gauri got married to Ishan and set foot in her father-in-law's house. Gauri's collision with Shail's mother is frozen there.

The cow of the story in the serial is so popular, but this time the heroine of the serial has achieved such fame that the role of laughter has spread in the net world. What exactly happened in Gouri Elo? The Mona Lisa, painted by the famous painter Leonardo da Vinci, is popular. There is also a picture of the Mona Lisa hanging in Ishan's house.

Seeing that picture, Gouri thought and realized that it was a picture of a deity. So in that picture, she shows incense wearing a garland.

Netizens laughed when they saw this scene. Gouri doesn't know anything about the rare creation of Leonardo da Vinci, again she is worshipping in that picture wearing a garland - the eyes of the spectators are filled with tears.

Someone says, 'That's all there is to it.' Someone wrote again, "Fortunately, he is no longer alive. It would have been heartbreaking for The Vinci to see this."

However, many have also stood by Gouri. Fans claim that Gauri, a girl from the village, can't recognize Mona Lisa in any way. According to the script, Gouri's supporters are seeing any mistakes in her character.