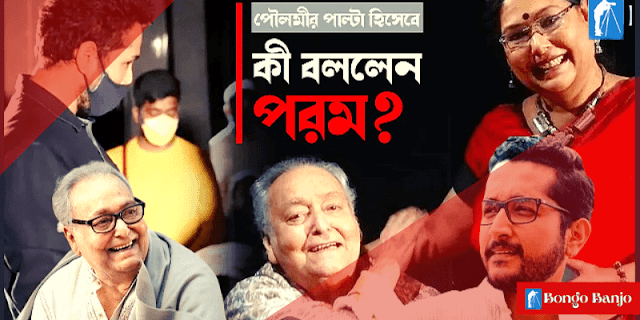 He is not. Unnecessary thorn in the side of him is very necessary? Soumitra Chatterjee's biography Abhijaan' directed by him will take the storm, Parambrata Chatterjee had already sensed it.

Before the release of the film Abhijaan, he was heard saying life, Satyajit Ray, Soumitra Chatterjee, Uttam Kumar are still the passion of Bengalis. No one tolerates one side of the hair. That's why people were shocked to see at a glance, why Q has been sentenced to Satyajit Ray?

The director Parambrata Chatterjee claims he was ready for it. A few days after the release of the film, a new controversy arose as to whether there was any distortion of information in the film Abhijaan. Which is not at all desirable to the family, or relatives of the late legendary actor.

That statement has taken place in the form of allegations on social media. According to Shramana Ghosh, a relative of Soumitra Chatterjee, there are a lot of scenes or information in the completely wrong film.

Soumitra Chatterjee had to take a lot of pictures especially because of Randeep's treatment - this information is not correct, claims Shramana. He further alleged that such information was distorted. He asserted that his confession had been obtained through torture. They didn't even expect it from the director. 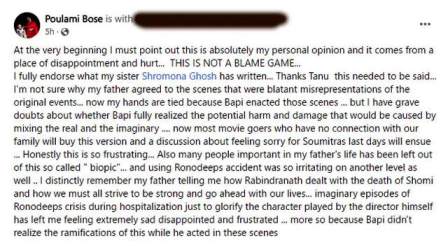 Soumitra  Chatterjee's daughter Paulmi Basu shared that post of Shramana on her Facebook page. With the statement, ‘I fully support what my sister Shramana Ghosh has written. Thanks, Tanu, it needed to be said. I'm not sure why my dad agreed to act in that wrong scene! Now my hands are tied. Because Bapi did those scenes. But I have serious doubts about whether there is a possibility of loss if the combination of real and imaginary is possible, whether Bapi fully understood it or not ....! '

At the same time, Parambrata Chatterjee claims that when the screenplay is taught or the shoot starts, Soumitra Jethu is conscious. Not that anything happened without his knowledge or during his illness. The actor had enough control over himself. As a result, even if someone says something now, Team 'Abhijaan' has nothing to do with it.

The director is not feeling so stated. At the same time, he is confident, the film shows exactly the direction he wants to take. He knows that there is no end to the demands that could have been made or should have been made! This idea can be of any image critic without being family.

As a result, discussions and criticisms will continue. Parambrata Chatterjee further claims that if Soumitra Chatterjee was alive, he would have given all the answers himself. Asking such questions now means pointing the finger at him. At the same time, he also raised the question, who is not there, what is the need for him to be unnecessarily thorny?

Satisfied director after seeing the movie again in theatres? According to Parambrata Chatterjee, he must be satisfied. "At the same time, the audience is satisfied," he said. He has been impressed by the criticism of the media. Since the release of the film on Thursday, almost everyone has been busy with Abhijaan.

The audience is going to the theatre. Those who can communicate directly after seeing the pictures are reporting. Those who can't do that, have shared their love on social media. Trade is also good enough. The person is giving Soumitra Chatterjee a chance to understand this picture once again. That's the decent thing to do, and it should end there.

If the wind of controversy blows in the direction of a good film, will trade gain more momentum? Parambrata Chatterjee is not at all concerned about this aspect though.