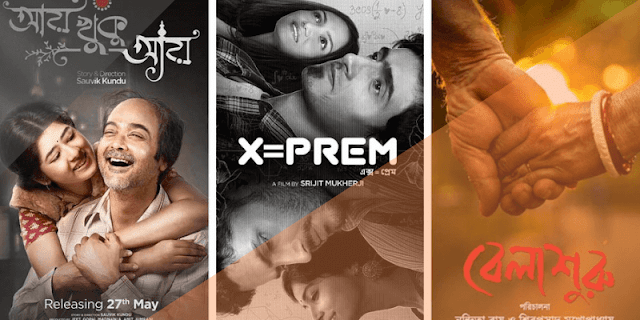 Prosenjit Chatterjee, Srijit Mukherjee and Shibu Mukherjee are coming in an alliance! Tollywood clash among themselves? Shatdeep Saha, the owner of Ajanta Theater, does not see any such possibility even after much thought.

His counter-question is, "Is it trade or dirty?" Sick competition in the name of picture release! Before the release of the film, the directors did not even think about where we would get the theatre from! "

May means the heat outside. That swell will fade away under the pressure of a bunch of Bengali films. One announcement after another says that star-studded Bengali films of various tastes will be seen in the theatres throughout the month.

Is the world of Bengali entertainment coming down in this way to bring down the image of the South? Tollywood will benefit in the end?

Souvik Kundu's second film 'Aay Khuku Aay' will be released on May 26. On the same day, Arindam Shil is bringing back the detective 'Shabor' to the theatre.

Ena Saha is bringing her 'Chine Badam'. In this film Shiladitya Maulik, she is the heroine of Yash Dasgupta.

Who will the audience see? The director Souvik Kundu claims, "One, the release of more than one film was delayed for almost two years due to a pandemic.

This time they will be released. As a result, we all have our hands and feet tied. So destiny is the spectator. At the same time, the director wants all the films to do good business.

Will you really do that? Shatdeep Saha, the owner of Ajanta Theater, but after much thought, he does not see any such possibility. Annoyed Shatadeep's counter-question, "Is it trade or dirty?"

Sick competition in the name of picture release! The directors are not even thinking before the release, where will we give the theatre!

Because, even if the number of pictures increases, the number of halls is not increasing! Even if a picture is popular, it has to be taken down from the hall. To leave room for the next cinema. "

Shatadeep's further argument is accompanied by Hindi, English, and South movie. Who will leave and who will give place to the owners!

According to the owner of Ajanta Theater, viewers are not confused when one or two Bengali films are released every week. That is not to be.