In Tollywood now only sad and detective films, our film "Kishmish" with love: Deb Adhikari! The director argues that many people fall in love.

Following that argument, the name of the new film should be 'Kishmish'. Which is worse to see. But sweet to eat!

This is a matter of 'Dev not speaking anything! But Dev Adhikari has no objection to floating in love on the screen.

Again with Rukmini Maitra. The "Kishmish" movie is going to be released on April 29. Earlier, the hero-heroine in the promotion of the new film on Saturday's live show 'O Jana Kotha'. 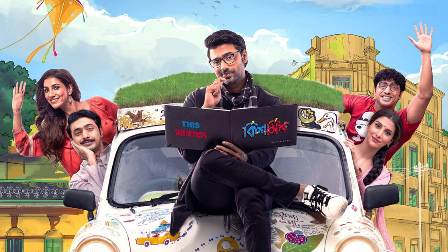 The question of the audience, who first came up with the story of the film? Why the name of the movie is 'Kishmish'?

Deb's reply, the story's director Rahul Mukherjee. He had been spinning the story for eight years. No producer has dared to say a new story.

In the year 2019. The story came to him through Kharaj Mukherjee. The actor Dev claims that he also knew Rahul Mukherjee. Deb's mind was filled with the story on the first day. Rahul Mukherjee is holding his hand.

The name of the movie could have been much more name. But why 'Kishmish'?

Actor Deb Adhikari said, "Love films are rarely made in Bengal now. When a formula hits, the pictures are taken one after the other by repeatedly putting him in front. This movie of love breaks that myth.

In that case, the director Rahul Mukherjee argues, that many people fall in love. Following that argument, the name of the new film should be 'Kishmish'. Which is worse to see. But sweet to eat!

The director Rahul Mukherjee's argument will be remembered by this generation, Actor Dev Adhikari understood. So he did not object.