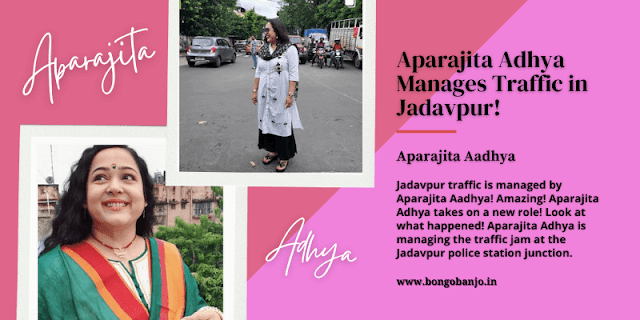 Look at what happened! Aparajita Adhya is managing the traffic jam at the Jadavpur police station junction.

Sometimes she stops the car by raising her right hand, sometimes she asks the car to move forward with her left hand. Everyone is shocked to see this act by Aparajita Adhya. What is happening?

The story is that director Pavel's new film, Kolkata Chalantika, is going to be released this Friday. Aparajita Adhya is the traffic police for the promotion of that film.

She will also be seen in the role of a traffic constable in the film. Actress Aparajita Adhya brought that character into reality.

The memory of the 2016 Posta flyover disaster still lingers in Kolkata's memory. On March 31, at 12:20 PM, the Posta flyover or bridge in north Kolkata suddenly collapsed at Ganesh Talkies.

26 people died, and many more were injured. And countless people became homeless. How many people were just buried under the bridge? 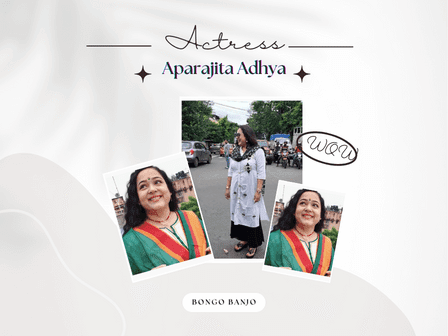 Director Pavel made the film in the context of that tragic incident. That is, reality will be mixed into the fictional story. The name of the film is Kolkata Chalantika.

Ever the young director, Pavel loves to work on sensitive subjects. The audience felt it from his first film, Babar Naam Gandhiji.

The story of this film was jointly written by Swati Biswas and Pavel. The screenplay is based on the life stories of some people.

At the centre of the story are Aparajita Adhya and Rajatava Dutta. Isha Saha and Saurabh Das have paired in another.

This is the first time that YouTubers The Bong Guy and Kiran Dutta have appeared in a Bengali film. Their characters come from different socio-economic backgrounds.

Those who somehow have to depend on the flyover in the city for work or living. To see how the stories of these people finally meet at one address.