This time in Bankura, Pushpa Raj! Allu Arjun is shooting for Pushpa 2 in Bankura District. Be it the Pushpa, Jhukega Nehi dialogue or the Pushpa film song.

This South Indian film took the box office by storm. Pushpa was overcome by fever from eight to eighty.

Posting that picture on social media, director Sukumar Bandreddi wrote that Pushpa Raj is coming back. But there is another surprise here.

According to sources in the film industry, some parts of the second part of Pushpa 2 may be shot in Bankura District. It is heard that the whole team of Pushpa 2 will come to West Bengal to shoot the action scenes.

Not only that, it is known that West Bengal will also appear in the story of the second part of the film Pushpa 2. However, the director of the film did not open his mouth about exactly how West Bengal would be shown. 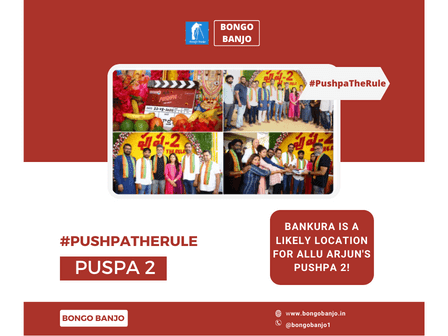 However, it is rumoured that Pushpa Raj will get drunk in a gunfight with the opposing smugglers. The scene will be the Khatra of Bankura District.

The production company has not confirmed anything about when the shooting will start. But the news is that actor Allu Arjun will start shooting in early 2023.

According to the news received from film industry sources, there will be a big change in the script in the second part of the film Pushpa 2. Even, the climax will surprise the audience.

Director Sukumar Bandreddi told the media that the second part of this film is being prepared to keep in mind the way that the film Pushpa was a great success in the whole country.

It is known that Allu Arjun's look is also being rethought. Allu Arjun will also be seen in a brand new look in Pushpa 2.

Not only that but Fahadh Faasil's character will also be given a little more importance in the film Pushpa 2. which may be the big surprise of this film.