The official trailer of Prosenjit Chatterjee and Dev Adhikari's new movie, Kacher Manush, is out now!

Dev Adhikari and Prosenjit Chatterjee are teaming up as Kacher Manush. This news was known in 2021. The film will be released during Durga Puja. Actor Dev also said this on social media.

And now the trailer for this film has been released. The trailer hinted that this film about Prosenjit and Dev is going to tell a completely different story. In the story that will emerge, there is a conflict between life and death. 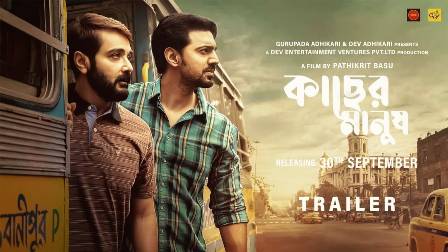 If Dev dies in an accident, a lot of money will be collected, which will be used for the treatment of his mother.

It is at this time that love comes into Dev's life by taking Ishaa Saha's hand in the film. The story changes. A battle between life and death begins. What will happen in the end? However, we have to wait till September 30 to know that.

In this new film directed by Pathikrit Basu, actors Dev and Prosenjit Chatterjee have teamed up. Actress Ishaa Saha will be seen in an important role in the film. Earlier, the motion poster for the film was released. Actress Sushmita Chatterjee can also be seen.

Producer and actor Dev announced the making of the film Kacher Manush on Mahalaya last year. The motion poster was also released.

In that poster, Prosenjit Chatterjee and Dev are on both sides of the railway line. It is believed that the director, Pathikrit Basu, is going to tell the story of the relationship.

Earlier, he directed films like Haripada Bandwala, Total Dadagiri, Fidaa, and Ke Tumi Nandini. This time, Dev and Prosenjit Chatterjee are brought together in one film. Bengali film fans are looking forward to seeing two superstars in one film.