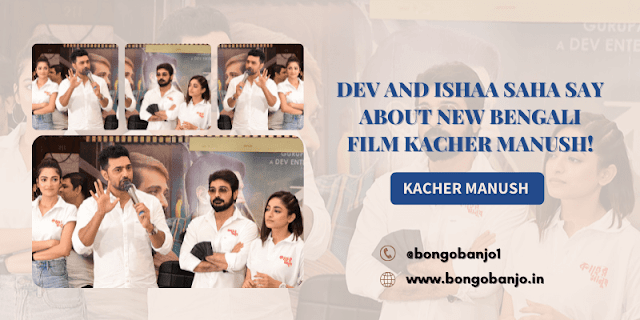 Dev and Ishaa Saha are back together on the big screen after the film Golondaaj. This time, two stars are bringing Kacher Manush to Durga puja. Before the release of the new film, they shared many things in an intimate chat.

(Q.)  Dev, I want to know about the film from you. Ishaa Saha, if you tell us something about your character.

Dev: When suicides are happening all around, I have seen celebrities committing suicide too. At the centre of the film is a LIC agent, in a life-and-death tussle. People are getting depressed very quickly.

If there is a positive story to be told about this, Kacher Manush is one such story. This film is about today's young generation who can't stand rejection, and can't overcome various obstacles.

But there are many twists in the story, which cannot be understood without seeing the movie.

Ishaa Saha: My name is Alo in this film. A girl from North Kolkata, who is very lively. Loves to talk. And wherever it goes, it can spread joy like a light. Alo speaks so much.

(Q.) Ishaa Saha, you have released two films at the same time. What is the pressure on two producers?

Ishaa Saha: Had it been producer Dev and any other two producers other than SVF the pressure would have been the same. It feels so good to think that two films are releasing together in Durga Puja.

I am enjoying but at the same time, there is a lot of pressure. I can't explain it. I want both films to play. Pushing both films as much as I can. 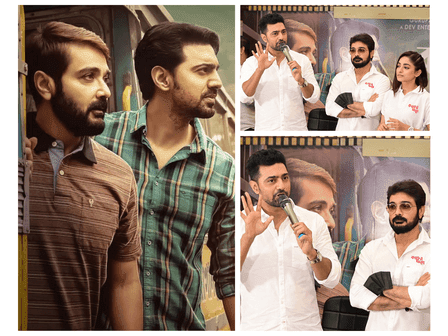 (Q.) A few more Bengali films are releasing along with Kacher Manush in Durga Puja. How are you handling the pressure of competition?

Dev: I was born in competition. Last Christmas when no one dared to release a Bengali film, I did. After the pandemic, all three of my films have become blockbusters.

So don't think about the fact that there is no film released in the cinema hall. I do not judge my success by the failures of others. I Judge my success with my content.

(Q.) After Golondaaj with Ishaa Saha, you worked again in Kacher Manush, how did you feel?

Dev: I really liked her after working together in Golondaaj. And Ishaa Saha has always been typecast as a serious character, so I thought she would be perfect for this role.

And I can say standing at this moment, she is a fantastic actress. And in this film, except me, everyone is an actor.

Ishaa Saha: What is this again? Everyone says Dev is not a good actor. But how can I do well if the actor opposite me doesn't react properly?

I have seen while working with Dev, that he is very dedicated. I think our understanding of this film is better than before.

Dev: My chemistry with every actress is very good. And Ishaa Saha as an actress is intelligent and easy to connect with. So it seems, our chemistry is better. Dev is a self-made actor and Prosenjit Chatterjee has a legacy.