Big shock after the success of the Aparajito film. The delayed shooting of Titumir film. Actor Jeetu Kamal is upset.

As Aparajito Roy won the love of the audience as well as the praise of the critics. However, Jeetu Kamal is disappointed.

On the night before his birthday, he came to know that the work of his next film, Titumir, had been delayed. This is ultimately a disappointment.

After the success of Aparajito, Jeetu Kamal was preparing for Titumir. But seven days before the start of shooting, he found out that the work on the film had been delayed. The actor was devastated.

He expressed his disappointment on Facebook on his birthday. The actor said how much he works for his character.

Always try to give two hundred per cent. Jeetu Kamal said that both success and failure come in the hands of achievement. 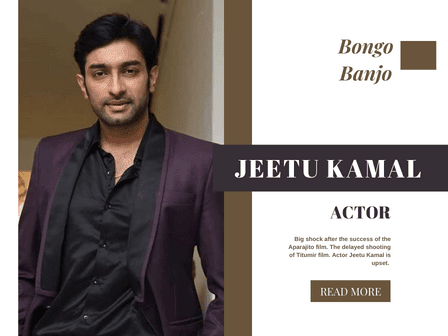 After that, he brought up the topic of the film Aparajito. Jeetu Kamal said, "Aparajito has given him a lot of success. It also gave joy and satisfaction. In addition to this, it also caused some severe suffering. "

The story behind the making of Satyajit Ray's Pather Panchali. Jeetu Kamal had to sacrifice a lot to play the role of the legendary director. Many people misunderstood him. The actor also said that he left many jobs to maintain his image.

After that, he wrote on Facebook, "but also tell me that I am not Kuber's child. As I came to know Saturday night, my Titumir film has been postponed. I won't go into what the reasons are, or what the story is, but I have worked tirelessly for the last two months for the film. But 7 days before the shooting of the film, I got word that the film was not being made. Do you know how hurt an artist's mind is? How emotionally devastated an artist is! "

Jeetu Kamal is a fantastic actor. His movie Aparajito is critically acclaimed. His performance as Aparajito Roy is very good. We hope he has come back again.