These music videos are pornographic! Two female YouTubers were severely beaten after making a complaint! Pornographic music videos Two female YouTubers were severely beaten up for raising this complaint. Such news has created intense excitement in the Rahra area of North 24 Parganas.

The two injured YouTubers have been identified as Sannati Mitra and Sri Bhadra. Both suffered serious injuries as a result of the beating. A complaint has been lodged at Rahra police station.

It is known that Sannati Mitra and Sri Bhadra started their careers in 2017. Along with acting and modelling, they also run a YouTube channel.

On September 2, they uploaded a music video named "Rosogolla" on YouTube. In which there are two male actors besides Sannati Mitra and Sri Bhadra. More than one lakh people have already watched the video.

To celebrate the success of the video, Sannati Mitra and Sri Bhadra went to a place called Doperiya in Rahra. Allegedly, the miscreants attacked them there.

Everyone was wearing a helmet. And they had masks on their faces. Talking about this, Sannati Mitra said that they were going through a narrow road.

Suddenly, the miscreants came on a bike and hit Sri Bhadra first. Sri Bhadra called her. She looked back after hearing her friend's call. 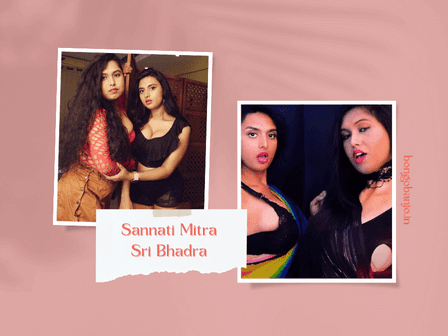 Then one of the miscreants hit her on the back of the head. Two female YouTubers were verbally abused.

Even though they are Bengali, why did they make such 'obscene' videos without being a star or star kid?

That question was asked. It was also commented that they should be killed for making such songs.

Sannati Mitra and Sri Bhadra informed them about their visit to Doperia on Facebook live. It is believed that the miscreants know their location from there. And this attack was planned.

They can't work independently from now on, can they?

The question was asked by Sri Bhadra. Many condemned the attack on two female YouTubers. Police have already started investigating the incident. It is reported that one person has been summoned for questioning.