This winter Projapati will fly in Tollywood, and the poster of Dev and Mithun Chakraborty's new film has been released.

Finally, the wait is over. The poster of Dev and Mithun Chakraborty's fresh film Projapati has been released.

The poster itself indicated that Projapati is going to tell a new story of love. The film is directed by Abhijit Sen.

Sharing the poster of the Projapati movie on social media, Dev wrote, "The audience's mind will be won, Projapati will fly this winter..". This movie by Dev and Mithun Chakraborty duo is going to release on Christmas.

From the point of view of politics, Mithun Chakraborty and Dev's position is completely different. However, their identity on the movie screen is only as an actor.

One is a Tollywood superstar, another is a Mahaguru. And this Mahaguru is returning to the Bengali silver screen after many years of holding Dev's hand. Dev and Mithun Chakraborty will be seen in the role of father and son in the film Projapati. 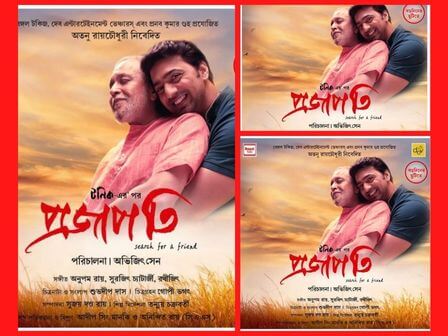 Director Abhijit Sen told the media that this film will tell the story of a father-and-son relationship. Apart from Dev, Mithun Chakraborty, the film also stars Mamata Shankar.

As per the story of the film, the actors are perfect. But the biggest thing is that Mamata Shankar and Mithun Chakraborty are back together on the silver screen after almost 46 years. This is the biggest surprise of the film.

Dev's Tonic was released as a Christmas film in 2021. Dev and Paran Bandopadhyay's film was a hit at the box office from day one. Even, watching the success of the film, the show time was increased in the multiplex.

Dev's Kishmish was released in 2022. The film was also a huge success at the box office. Dev will take that success with him to the film Projapati. As an audience, we are waiting for Projapati. Are you?