Sonu Nigam, a popular singer, has returned fees after recording the Mukti Dao song from the film Kacher Manush! Sonu Nigam Returned the Fee for Singing in Dev and Prosenjit Chatterjee's Film Kacher Manush, but Why? 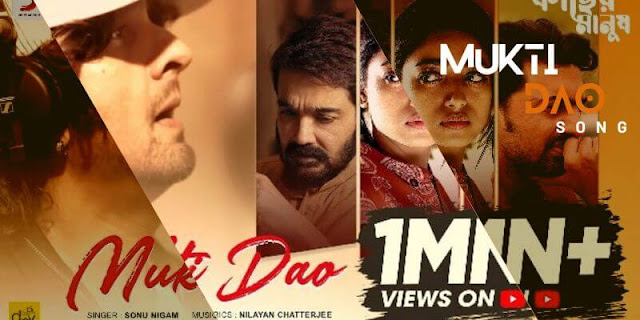 Sonu Nigam is the melody king of Bollywood. His voice is full of magic from eight to eighty. Sonu Nigam has sung a song in Dev and Prosenjit Chatterjee's Kacher Manush. and returned the fee taken from him. Yes, that's what the famous musician did. But why?

The song Mukti Dao from the movie Kacher Manush was released on September 16. The song is sung by Sonu Nigam with lyrics and music by Nilayan Chatterjee.

Earlier, he has also sung for Bengali movies. But Sonu Nigam gets emotional while recording this song, "If you love me, release me." His eyes became wet with tears. He liked the song so much that he returned the fee charged for it.

Talking about this, Sonu Nigam said that singing the song filled his heart. So tears came to the corners of my eyes. He also said that he would remember the line "If you love, release me..." for the rest of his life. "The song got the respect it deserves. "I am very happy that people liked, loved, and my voice touched their hearts," said the singer Sonu Nigam.

It should be noted that so far more than 14 lakh people have watched the song, Mukti Dao, on YouTube.

Dev and Prosenjit Chatterjee's Kacher Manush will be released on September 30. The two superstars have teamed up in this new film directed by Pathikrit Basu.

Pathikrit Basu is going to tell a completely different story. In the story that will emerge, a conflict between life and death will emerge. Ishaa Saha will be seen in an important role in the film.

Read More: Koneenica Banerjee Goes Live on Facebook to Talk About Her Health!