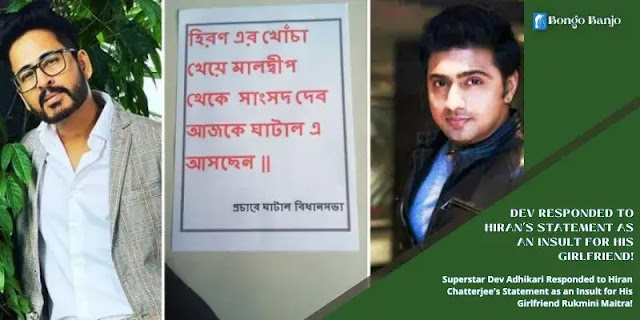 "MP Dev Adhikari from the Maldives is coming to Ghatal today after being bitten by Hiran Chatterjee", such a poster was put up by the BJP at the Ghatal. The Trinamool MP Dev Adhikari gave him a stern reply.

On reaching Ghatal today, he said Hiran Chatterjee's comment was not only an insult to his 'girlfriend' but every girl. As a father, Hiran Chatterjee will surely understand this.

Hiran Chatterjee attacked star MP Dev Adhikari over the Ghatal flood. Kharagpur's BJP MLA Hiran Chatterjee said, "As a Member of Parliament, I will take mine every month. As an MP, I will take a commission from what will be done here. I will also take a commission from Cattle Smuggling Enamul Haque. I will make a movie about a commission. And I will go on vacation to the Maldives with my girlfriend. And the people of Ghatal will be submerged under the water. I will go to the Maldives and swim with my girlfriend and the people of Ghatal will swim under the water during the flood." 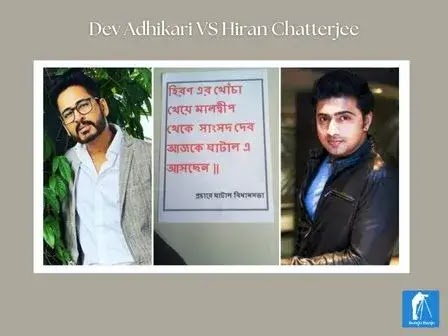 While answering this, Dev Adhikari said, "No one will benefit by belittling me. You have to come to Ghatal and win people's hearts."

In the words of the Trinamool MP Dev Adhikari, "If Dev goes abroad, he will travel with his own money. If you attack, attack me. please don't enter the house Who am I going with… I am going with honour. This is my relationship of eight-nine years, everyone knows. I'm not hiding. If you can't lose me Then enter my house…"

After that, Dev Adhikari said to Hiran Chatterjee, "I think he is also the father of a girl. He also understands that pulling someone like this is not just an insult to me or my girlfriend, but to every girl. If you or your party have any questions about fighting politically, I am here. Always ready to answer."

But they are good friends. Just replied to a friend's words as a friend. Later, however, Hiran Chatterjee again stated that he did not want to personally attack Dev Adhikari or his girlfriend.

Read More: Audiences Laughing at a Scene from the Madhabilata Serial!