Rajatava Dutta, Sudipta Chakraborty and Joy Sengupta got caught up in the complications of the relationship. The trailer of Tritiya is shrouded in a mystery of relationship.

Many films have been made in Bengal before about relationship tension, and alienation. But if the story is mixed with mystery! 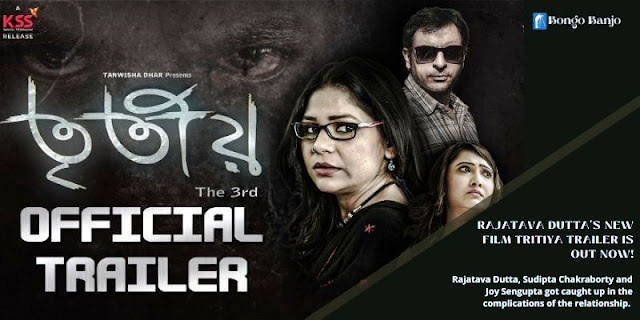 This film is going to be different from the others, as evidenced in the trailer itself. The trailer of the Tritiya film was released on Thursday.

What kind of story will tell the Tritiya?

The story of the film Tritiya revolves around the complexities of relationships. Sandipan and Sharmila are husband and wife.

But suddenly there is a twist in the story. All of them are involved in a murder case. Entry into the story, police officer Bireshwar Hazra. Then the relationship story turns into a mystery story.

Joy Sengupta will be seen playing the role of Sandipan in the film. Who is an advertising agency executive by profession.

Director Animesh Basu said "It is a relationship story. Which has a twist at every turn. This film is Tritiya of relationship and trust." This film will be released under the banner of Blessings Media.

I always love to watch Rajatava Dutta on the silver screen. He is a very good actor. As a police officer, he is phenomenal. With his, there have Sudipta Chakraborty. She is a very good actress. I hope this film will love the audience.