Director Pavel told the life story based on the Posta flyover accident. What exactly is a Kolkata Chalantika Bengali Film?

Director Pavel showed the light of young potential seven years ago with Babar Naam Gandhiji. But in the intervening years, Pavel lost a bit of his charm in the films Asur and Rosogolla.

But Pavel wanted to go back to where he left off with his new film, Kolkata Chalantika. Without being too serious, life can be turned into a collage of bits and pieces of ongoing life.

A drawing that shows the responsibility and philosophical mind of an artist.

Subrata Mallick's camera has brought out a beautiful document of people's lives in different parts of the city, in different regions.

The document contains criticism of the party and the government; the beauty of slum life; and the hollow appearance of rich houses.

There is no ongoing narrative to the story; this film is just a depiction of some events. In that case, there are the residents of Sourav Das and Ishaa Saha.

There is also a family-like Shatabdi Chakraborty who became a big man by selling ethics, and an old woman like Anamika Saha who sold her body in Sonagachi, etc. 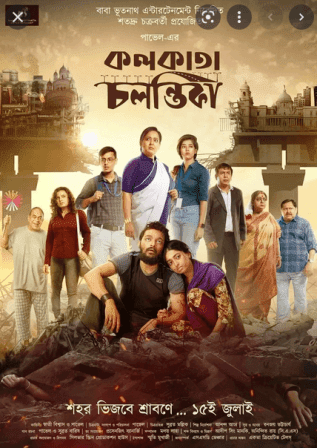 In the first half of the film, Pavel has arranged a torn story in a very light mood. The lighthearted mood of the film turns a little serious in the second half after the Posta flyover collapse accident near Ganesh Talkies in North Kolkata.

The work of a humanitarian and director begins at this stage of the film. Pavel portrays the problems of various characters very well. There is also a message of a sense of life in that solution.

The party supporter also had to say, At some point, I want to regain my respect as a person. I will not be a party member anymore.

Ditipriya Roy gets her lost lover back. Rimi or Shatabdi Chakraborty slaps the boss, saying that she will not work anymore. Sourav Das and Ishaa Saha find the top of the head roof in Nimatla.

Yes, these events may all seem wishful thinking, but that is what a humanitarian artist does. What Pavel has done may seem like taking a cinematic license, but that is the duty of a sensitive artist.

Several songs go well with the direction of the film. Each artist has given their all. Rajatava Dutta and Aparajita Auddy grabbed the attention.