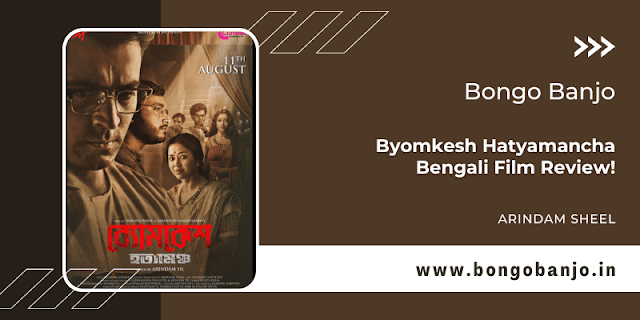 Bengali audiences have always felt attracted to his mystery films. Byomkesh Hatyamancha is no exception. As he was earlier successful in Byomkesh Bakshi, the director struggled to outdo himself.

Audiences would love to see actor Abir Chatterjee back as Byomkesh Bakshi once again on the big screen. Based on the unfinished story of Sharadindu Bandyopadhyay's Bishupal Badh.

The film's story was completed jointly by directors Arindam Sheel and Padmanabha Dasgupta. Because the film's story is unknown to the audience, their curiosity will remain till the end.

The context of this film is the Naxal Movement of 1971. The theatre world of that time gained importance. The style of the story is a chamber drama, so capturing the period of the seventies on screen is a bit easier.

It was difficult to hold the audience's attention through long dialogues. But it is possible because of the skilful actors. 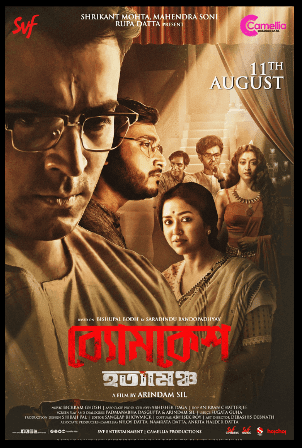 The beginning of the film is black and white. Murder at the outset Kalicharan sees his sister-in-law Malti in an intimate relationship with Bishwanath Pal. Then what happens?

Kalicharan was sentenced to 14 years in prison for murdering Malti. The audience knows this from the beginning.

Take, year 1971. Neighbour Pratul Babu comes to Byomkesh Bakshi and Satyabati's house. The good news is that Satyabati is pregnant. Plans are made to go to the theatre.

Sudden death during the play Byomkesh Bakshi is in the audience. As usual, he descends in search of the secret, taking Ajit with him.

As the film progresses, Byomkesh Bakshi moves past the suspects bit by bit and reaches the main assailant. There is no rush in the screenplay. 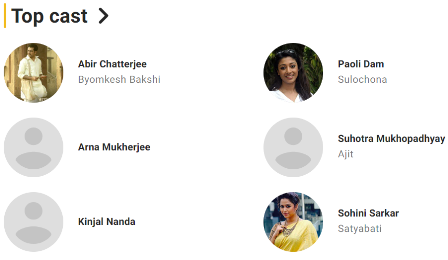 Now and then the viewer will think that the suspect is coming, and the situation will change in a moment! However, the performance of some actors is weak.

Satyabati is pregnant and as caring as ever, and Byomkesh Bakshi has matured. Sohini Sarkar had nothing special to do in this film. Yet, Abir Chatterjee and Sohini Sarkar showed well as a mixed doubles pair.

As the new Ajit, Suhotra Mukhopadhay is excellent. Paoli Dam is perfect in a significant role like Sulochona. Paoli Dam has brought out all the anger, frustration, and love of the actress Sulochana in her sly eyes.

Kinjal Nanda looks good with the grey character like Bishupal. Although the end of the film is a bit slow, the director has managed to hold the attention of the audience till the climax.