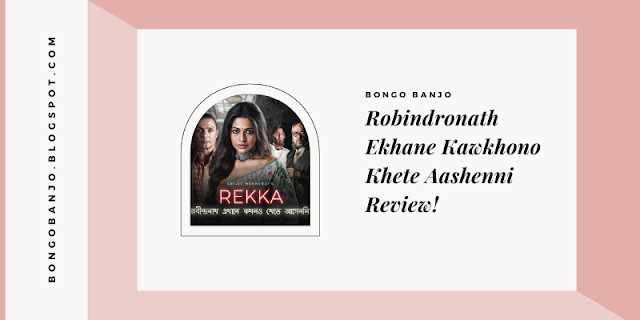 The empty desert, the bustling highway on the Indo-Bangladesh border, next to a glittering restaurant called - 'Robindronath Ekhane Kawkhono Khete Aashenni'. Thanks to the hue and cry, director Srijit Mukherjee's 'Special Menu' this series is a chance to try! But after tasting the taste how much satisfaction? Let's find out.

Sundarpur, a remote village. There is a luxury restaurant in Daksite. But even more famous than the fame of the food of that family hotel is its owner Muskan Zuberi. Very mysterious. Rabindranath in his sleep-dream. As soon as he got up, he became a fan of Vanusingh.

Political leaders also follow in the footsteps of that lascivious person. A man came from the city with the identity of a journalist to cover his restaurant.

He is Nirupam Chand. He guesses that Muskan is a murderer. At least 5 people have been killed. And using that instinct, he went down to the investigation.

Coincidentally, on the first day, there was a conversation with 'Khabari' Atar Ali, who is called 'Local BBC' of Sundarpur, but it is not an exaggeration.

From how many boxes of rice there are in the house to who is lying in ambush on the floor of the bed, all the news is at the fingertips of that little one. Diameter!

The investigation against the mysterious Malkin Muskan of the zamindar's house started with Nirupam-Atar. He was also caught by the police.

Then the real identity of Nirupam is revealed (it is advisable not to break it here). But even if you don't give the 'spoiler' of the series, one thing must be noted that from the vampire witch to black magic, murder, the taste of restaurant meat, cannibalism despite the mystery-thriller in this trailer, the taste of creepy thriller element, if you end up with hope!

Although the expression or dialogue is fashionable, Mushkan Zuberi has a bit of a rhythm in the presentation. Famous Bangladeshi heroine Ajmeri Bandhan Haque has played that role. His character is the main material in the mystery of the series REKKA, meaning "Robindronath Ekhane Kawkhono Khete Aashenni".

The kitchen had all the ingredients, but the director was probably confused when he read it in the pan. How did the woman who was accused of five murders, the whole series has been kept secret, how did she commit the murders, what is the connection between them? The taste of that mystery was no longer available.

Although there are many talented actors like Anibarna Bhattacharya, Rahul Bose, Anjan Dutt, Ajmeri Bandhan, it can be said that everything is immersed in the loose fabric of mystery.

The story of Rabindranath's refusal to eat at the zamindar's house has been included in the series in such a way that in the end no meaning was found. If viewers are looking for the thrill of cannibalism in REKKA's story after watching the trailer, they will be disappointed.

Because, even if the man-eating issue is shown in the coup of the situation, it is not very touching in the mind. In the series, Rahul Bose seemed a bit awkward. Actress Ajmeri's mannerisms, dialogue but there is no depth of character. Anjan Dutta moderated. However, Atar Ali Anirban has done extremely well.

Just as the language of Upper Bengal adorned his mouth, so performed the superior character. There are a total of nine episodes in the series. Each one is 25-30 minutes long. Not too long.

You can watch the second series directed by Srijit Mukherjee, 'Robindronath Ekhane Kawkhono Khete Aashenni'. However, there are some 'X-Factor' in this series. Why see this web series?

There are a few scenes to watch throughout the series. While the post-crash scene on the icy mountaintop has been shown, director Hollywood has left an impression. There is no way to deny that.

As well as the scene of digging a grave in the dark of night or when Atar Ali rescues a human skeleton from under the bed, the director has shown that scene in the light of a torch with great skill.

It is to be noted that although the texture of the mystery in the story of this series is light, the experiment that you have done with the light and set design in several scenes, is worthy of praise. So you can watch this series.