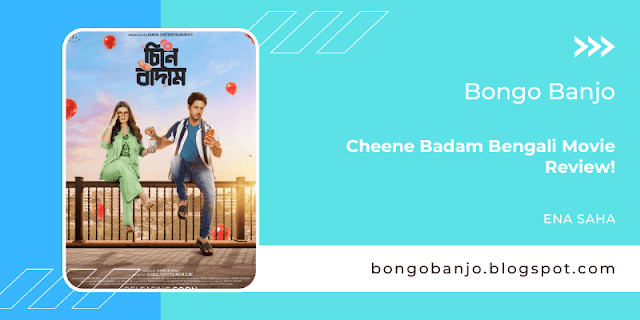 Do you love to watch Bengali films? Then Our Topic, Cheene Badam Bengali Movie Review, is Just for You. The story of Yash Dasgupta and Ena Saha's friendship did not come to mind. "Cheene Badam" remained tasteless.

Just as modern technology has increased the distance between people, it has also allowed people to make friends with strangers.

Today, sitting on the grass carpet in the field, two friends or lovers do not eat "Cheene Badam" from a single stick.

But in the virtual world, a kind of emptiness and temporary ‘friendship’ is created. Shiladitya Moulik's new film, "Cheene Badam," speaks of a friendship being formed, broken, and reunited.

There has been a lot of controversy over the film "Cheene Badam". Five days before the release, actor Yash Dasgupta announced his intention to release the movie.

Ena Saha said she did not understand why Yash Dasgupta made such a decision. She cried at the press conference.

Yash Dasgupta had some objections about the fourth song of the film, so the director Shiladitya Moulik thought he could make this decision.

On the day of the release of the film, Yash Dasgupta announced his decision to take legal action against the directors and producers of "Cheene Badam". So much controversy with the film. How is it? The big problem with the film is the inconsistency of the screenplay.

Young people in urban areas may be able to get a better understanding of the "Cheene Badam" app of modern computer and tablet technology. But can everyone?

A competing businessman wants to ruin his business by conspiring again. However, the "Cheene Badam" app is very popular. But in the race for success, the friendship suddenly bursts.

The app also has to be shut down by the court order. Then? Then various events happen. But the logic of many cases is not understood.

Making logic, argument, space, time, and environment all meaningless, Shiladitya Moulik brings Rishabh back in front of the thirst through the app 'Cheene Badam' at the right moment of the marriage.

Shiladitya Moulik cannot explain how this is possible. Yash Dasgupta has not yet become an actor. It requires a lot of practice.

In comparison, the producer and heroine, Ena Saha, is much more comfortable. But where did she get another chance in the whole film?

Soumyadeep Dasgupta draws attention to the little character. Besides, there is no soul in the story, there is no emotion. Like a modern computer, just a heartless body of technology like an Android phone.

The taste of "Cheene Badam" could not be found without breaking the shell of that technology.