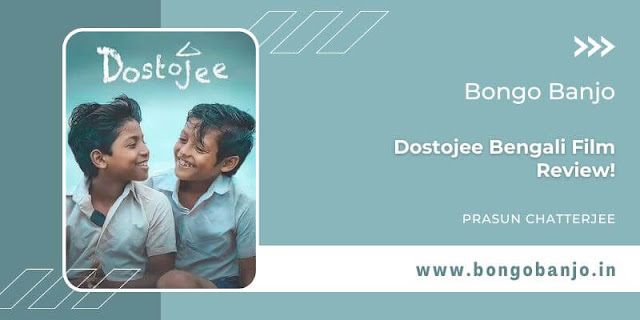 Friendship is people's first relationship beyond blood relations. We keep close friends for the majority of our lives. And friendship is such a word, which saves us from lifelong problems.

A new director, Prasun Chatterjee, made a film called Dostojee about the dialogue of sky-filled friendship in this metaverse era.

What a trashy, overdramatic film, best watched in silence. Every frame of the film is irrigated a little by the soil-water-air-sun system of West Bengal.

What a carefree but never-ending celebration of life's joys and sorrows! As a result, after seeing the movie, the call of Dostojee spread in the water, on the ground, and in space. Going to school with a tin suitcase, wearing the same uniform every day, and the joy of sitting next to a friend shows how intense and honest Dostojee can be.

Two boys, Palash (Asik Shaikh) and Safiqul (Arif Shaikh), live in a village near the India-Bangladesh border. A fence separates the two houses.

They study at the same school. Together, they go to school. Palash is a bit better at learning. Safiqul cheats at reading.

Standing shoulder to shoulder in front of the Bachchan Cycle Repair Shop, he saw the hero. He poses like a hero while taking pictures. 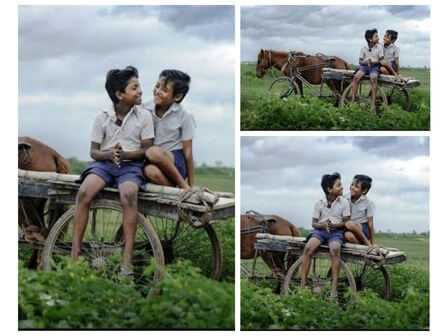 Palash is not an expert in this matter, but Safiqul is an expert. Safiqul, Latai Palash, bring a hard-bought kite. Accident while paying attention! Did you break my kite? That broke. I will not talk to you in life.

Another day, Palash is sitting on the bench, and Safiqul is entering the class. Palash moved away with a suitcase. No, Safiqul went away and sat. This episode is amazing. If you don't talk, can you stay?

After collecting money to buy a new kite, Palash walks to school one day for a friend. We have lost this innocent love. An unforgettable moment that is still hidden in some hearts, but it has been forgotten.

In the journey of Dostojee, director Prasun Chatterjee took us down memory lane once more. While watching the film, we remember Pather Panchali, Sahaj Paather Gappo, or Village Rockstar. 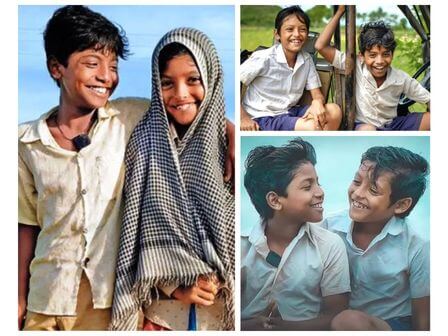 It is understood that the new director, Prasun Chatterjee, can carry forward the film tradition of this incident. The announcement of the Ram and Ravan story from Khan Sound's microphone turned the village upside down.

This is how a friendship story must weave silent love. The less said, the more beautiful the scenery. The film is not all rosy. I'm not revealing the story anymore.

Love, memory, and separation have a priceless contribution to our lives; they come and go almost like the changing of the seasons.

This film says that. More like water caught in a lotus leaf than a plump story, this film is woven with moments like pearls. It could be said about acting, but I'm not sure who's acting in this film. 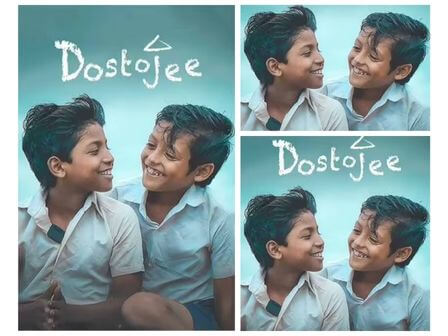 Swatilekha Kundu, Safiqul's elder sister, and Anujoy Chattopadhyay, a teacher, are quite good. Satyaki Banerjee's music keeps the mood of the film alive.

Prasun Chatterjee's sensitive mind, Tuhin Biswas' perfect cinematography and team effort make this such a pure film. You can definitely watch it in theatres.

For a few days, there was a lot of commotion: had a movie come out, won many awards, or been released in other countries? The name of the movie is strange, dude. 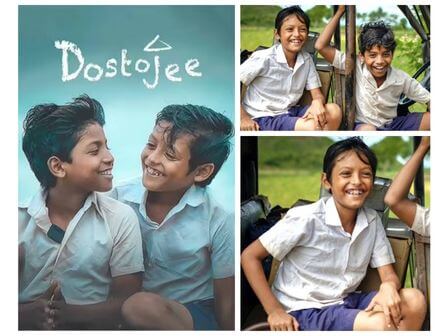 It has to be seen, but Dostojee So I went to see my friend today. And after watching it, I thought about what I saw.

I do not understand the technical details of the film. So I'm trying to say everything else while leaving that aspect as vague as possible.

The name and poster of this film tell us that this movie is a story of true friendship between two friends. But just what? Apart from friendship, many deeper issues are woven throughout the film. 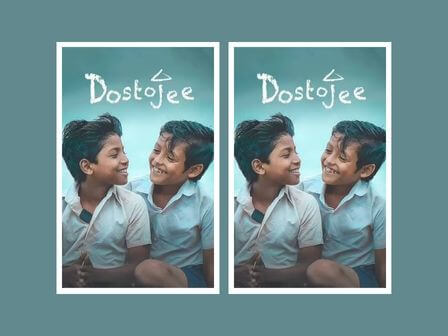 Such as social divisions based on religion, communal harmony, grieving the loss of a loved one and then clinging to something dear, or the environmental impact of a sudden event.

But neither subject overshadowed the other. An incredibly beautiful harmony can be observed in all the events.

It would seem that yes, this is exactly what happens in our lives. There are no "larger than life" characters, no entertaining music, and no extra humour or action.

There's just a simple, cheesy story and some real characters. This is the USP of this film. For those of us who spent our childhood in the village, this film is a mine of memories. 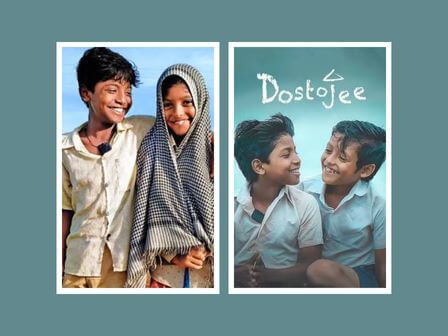 Kites, Kans grass by the river, mud houses, pattering rain, the sound of looms, walking in the rain with leaves on their heads, Fireflies —what's not in it?

And what an impossible story all the frames tell! You won't think it's a movie, and the characters are acting. However, nothing is too much anywhere. Many thanks to the director for this.

Camera & Cinematography: Amazing camera work. It feels like a living village has appeared in the cinema. Which do I prefer: light-dark work, slow-motion, wide-angle shots, or portraits? Oh, if only I could do such beautiful camera work.

Sound: I claim a national award for this category. No extra words. All taken from nature. The sound of raindrops, the sound of looms, the sound of horse-drawn vans, the sound of religious songs on the radio, the sound of cuckoos cooing, the sound of footballs playing on the clay, and finally the sound of heartbreaking cries. All are pure. Every word will surprise me. But silence will attract more attention than words. The director has used the silence so beautifully, it deserves special praise. 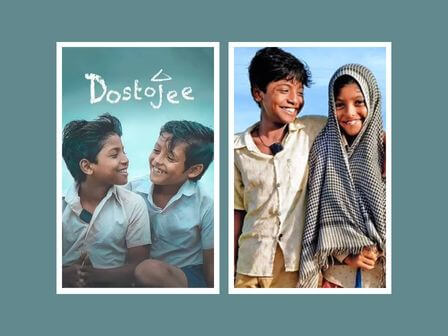 Acting: who are these actors, bro? I mean, who do they serve? No one's name or background is known. But what a great performance! I never thought it was their act until I saw the two children. Their acting is so honest and true. And how many supporting characters are there? Whoops. Just amazing.

Simple Dialogues: How difficult the words were, how easily the director said them through the mouths of children. There are no pretensions, no serious theories, and everything is fluid.

Metaphor: The events of the movie are so brilliantly portrayed with the help of metaphors that there are no words to say. Especially Jhulan Yatra: the story of a caterpillar becoming a butterfly, the story of a kite becoming a sword, and the madness of a madman. All are strangely beautiful.

There is very little to dislike. I just felt that the length of the film would have been a little shorter. The story felt a little drawn out. I don't have the guts to talk about the rest. 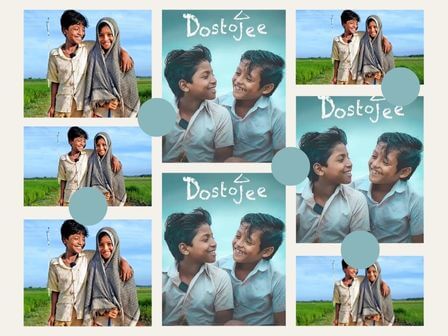 Finally, the audience will be in a bit of a daze after the film ends. Forced to think, what did it see? This also happens in Bengali cinema. If movies can truly touch the heart, this movie has done just that. mind touched more films like this should be made in West Bengal.

Do you know the director is very intelligent? Knowing full well that this number would receive no attention in the country of print or among a mediocre audience, the film was first sent abroad without being released.

He saved a good thing from rotting. brought in conquerors from elsewhere and then introduced them here, okay. The gem is suitable for those who deserve it. 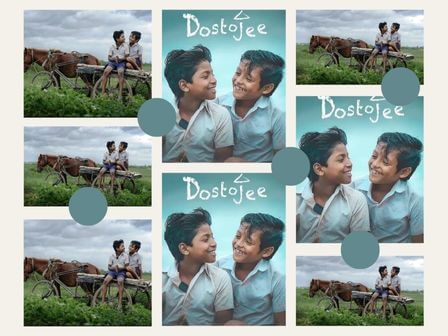 Even if the people of this country do not see the respect and recognition he has received from outside, he will not regret it. Yesterday, there were only 15 people.

Let's go; only the amazing cinematography and acting will keep you hooked. You're not looking for a story because there isn't one.

You won't even need to search. And the whole movie has almost no background music. just leaves and the sound of rain. Very engaging.

Let's join hands and go see; bring the family. Don't get discouraged. Rather, be proud of being Bengali.